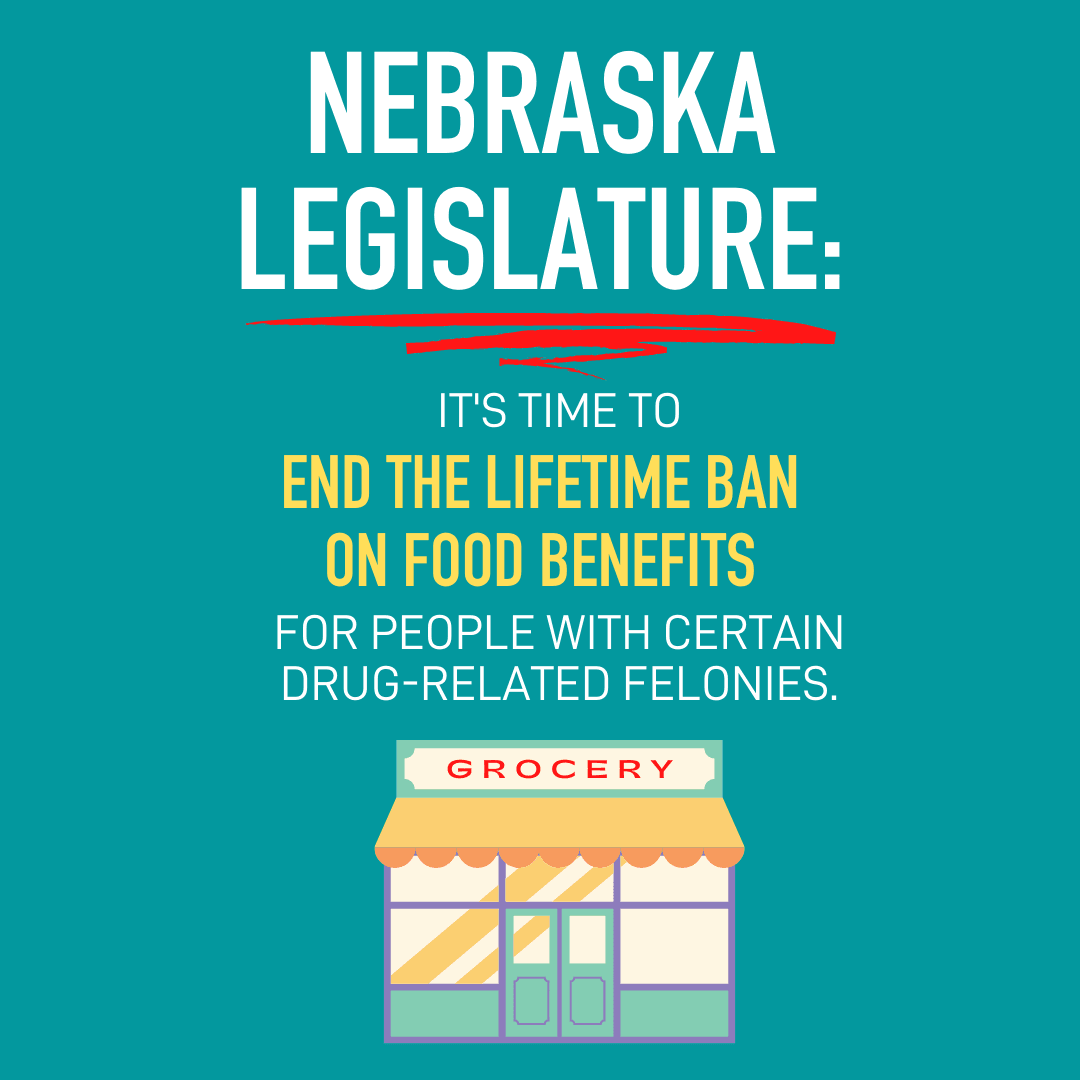 ACTION ALERT: Tell the Legislature Nebraskans reentering society should not be denied food benefits for life.

“When we try to get our lives back together and try to do right, we can’t get assistance.” - Lateeka from Lincoln

This year, the Nebraska Legislature has the chance to end Nebraska’s lifetime Supplemental Nutrition Assistance Program (SNAP) ban for individuals convicted of certain drug felonies. Senator Megan Hunt’s LB121 would do just that while making sure food benefits are available to people supporting children and families, reducing recidivism, and strengthening racial equity in our criminal justice system. This bill impacts over 1000 Nebraska families.

Contact your senator and ask them to vote yes on LB121.

Background on the ban

Federal law creates a lifetime SNAP ban for anyone convicted of a drug felony for possession, use, or distribution unless state law specifically modifies it. Nebraska currently has a modified ban that creates a small exception for persons that have two or fewer felonies for use or possession and have completed a treatment program. A full ban remains for those with felonies for distribution.

The ban hurts children and families

Approximately 1 in 10 children in Nebraska have a parent who is incarcerated. While families are still eligible to receive SNAP when a member is banned, the banned individual’s income still counts toward the household. Clearly, that person still needs to eat somehow and there are likely few alternatives to eating with the family. Simply put, when a household gets fewer SNAP benefits, children eat less.

Forcing recently released citizens to rejoin our communities without their basic needs being met leads to desperation and potential recidivism. As our leaders weigh a $240M+ new prison proposal and the long-standing prison overcrowding crisis (we lead the nation in overcrowded prisons), it’s past time to address front-end prevention strategies including food access.

In the US, people of color are arrested more frequently, charged more harshly, and are therefore more subject to the lifetime SNAP ban than white people. This practice helps fill our prisons with non-violent, low level offenders and also contributes to the disproportionate convictions and incarceration of people of color. Eliminating this ban would support greater equity by reducing barriers to successful reentry and recidivism.

Our SNAP Reentry Advocates created this easy online form to send an email to your senator asking them to vote yes on LB121. If you feel more comfortable calling your senator, click here for your senator’s phone number.

Now is the time to join the 28 other states that have already eliminated the ban to move our state forward. Contact your senator today!

Thank you for your advocacy!